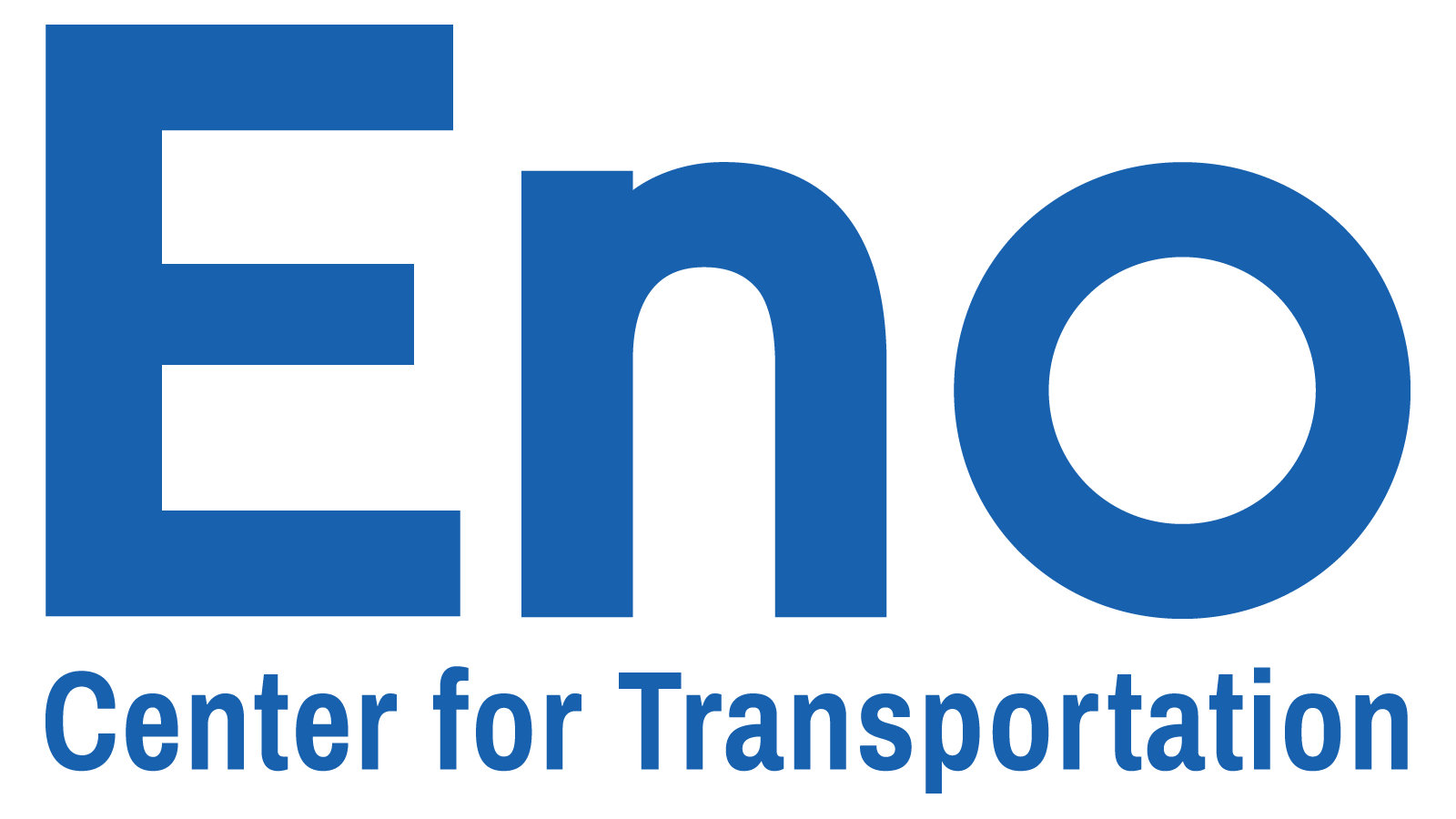 Since 2000, 61 urban rail transit projects have been completed in the United States across 16 states and the District of Columbia. Table 1 reflects a selection of 23 of these projects, the geography of which ranges from dense urban (e.g. Los Angeles Expo Line extension) to suburban (e.g. Phoenix Northwest Extension Phase 1) to exurban (e.g. Denver A Line) settings.

U.S. transit capital project delivery is almost exclusively done through existing public transit agencies, with a mix of funding and financing coming from the federal, state, and local levels. 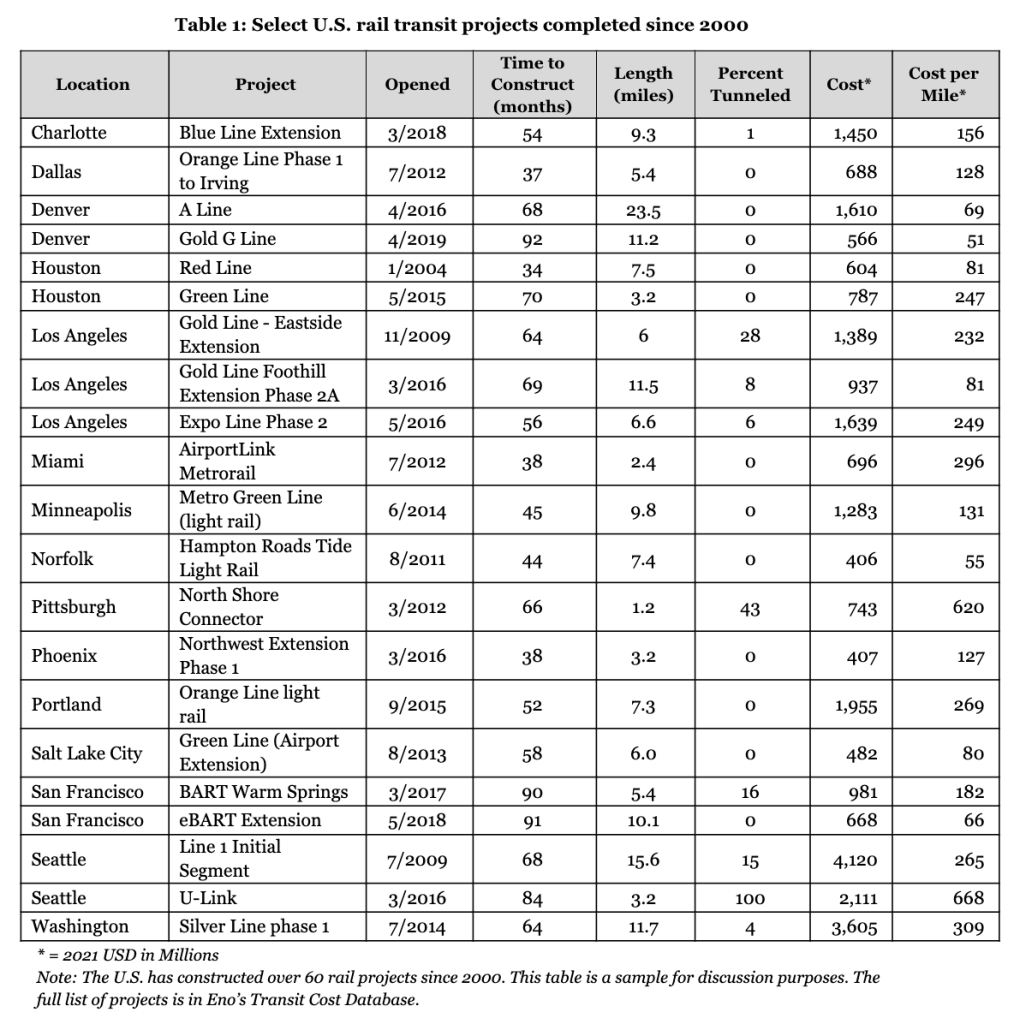 The U.S. federal government’s primary role in rail transit project delivery is to fund the construction of new capacity buildouts. Through the New Starts component of the Capital Investment Grants (CIG) program, for which nearly all large rail capital project fall, the U.S. Department of Transportation’s Federal Transit Administration (FTA) funds up to 60 percent of project capital costs, although that has varied over the past 20 years. The federal government’s role in funding transit capital and other infrastructure projects triggers compliance with the National Environmental Policy Act (NEPA), which requires federal agencies like the FTA to assess the environmental effects of their actions prior to making decisions. The federal government also sets regulations, such as wage standards, that must be followed in construction contracts. Individual federal agencies are tasked with creating regulations that determine how laws are implemented on a day-to-day basis.

The 50 state-level governments, the District of Columbia, and U.S. territories set laws specific to their jurisdiction that govern specific aspects of project delivery. For example, Minnesota law states that utility companies are responsible for costs associated with utility relocation. Many states also oversee or authorize the organization of transit agencies and networks and, given their role in governing transit throughout the state, provide financial support for capital investments. In 2019, states on average covered 23 percent of transit capital investments. This can vary widely depending on the state, with some states providing all nonfederal sources (for example, Massachusetts) and other states providing no nonfederal sources (for example, Texas). While state departments of transportation are primarily tasked with overseeing road and highway projects, they typically have rail offices that oversee transit agencies.

Metropolitan planning organizations (MPOs) conduct long-range regional plans for transportation. While federal law requires all urban areas with a population of more than 50,000 to establish an MPO, they typically have no direct involvement in project delivery. MPOs conduct planning processes that determine which capital projects will be pursued in a given region and how federal transportation funding will be allocated. MPOs are funded by the federal government and matching state and local government resources and are made up of local government and transportation authority representatives.

Transit agencies plan, build, operate, and maintain local and regional transit systems and are typically governed by boards of directors that include officials from localities around a given region. That representation allows localities to have a say in how projects are developed. Capital program departments at transit agencies are tasked with managing contracts for the development of capital projects.

Transit agencies contract with private companies to construct capital projects and, in some cases, to operate and/or maintain their services. Construction project delivery methods typically take one of three forms in the United States: design-bid-build, design-build, and construction manager-at risk. The most common is design-bid-build, where a transit agency hires an engineering and planning firm to complete project designs and separately contract with construction companies to build the project.

State and local governments also set regulations that govern project delivery, including laws that require or restrict specific forms of procurement. Twelve states do not allow the use of some forms of public-private partnerships (P3s) for public transportation projects, and all but two states (Iowa and North Dakota) allow for the use of design-build. Some states restrict the use of alternative delivery methods, in part as an attempt to avoid corruption and also because traditional procurements retain most of the control with the public sector, which some states are reluctant to give up. Other states legislate specific exceptions for projects, but the lack of local enabling legislation remains a substantial barrier to broader use of these methods. Similarly, some local laws and agency policies limit the use of reimbursable price contracts, restricting pricing contracts to some form of fixed-price agreement.

Project planning is a locally or state-run and -conducted process that occurs through federally mandated MPO transportation improvement programs and long-range transportation plans. The planning is typically done at the state or locally controlled transit agency, and MPOs receive federal funding to support the creation of plans that describe the development, integrated management, and operation of multimodal transportation facilities and systems. These processes determine long-term transportation priorities to meet anticipated transportation demand in specific states and regions, and thus determine which projects are most suitable for investment. Once there is a determination of the need for a transportation investment, an alternatives analysis is conducted to consider mode and alignment options. The alternatives analysis is a cooperative process undertaken by the MPO, state DOT, public transit operators, environmental, resource, and permit agencies; local officials, and other agencies that may be affected by the proposed alternatives. Public review and participation are a part of the alternatives analysis, though there is no specific amount of time or format required to collect this input.

Finally, the project development phase includes environmental review in accordance with NEPA. For large rail projects, early on during NEPA review, project sponsors communicate project details to the public and identify public concerns as part of the scoping process. NEPA review entails meeting other federal regulations for the protection of natural and cultural resources, such as the Clean Water Act and the Clean Air Act, and assessing how proposed actions will affect those resources. The FTA and other federal agencies then decide whether the project can move forward.

Capital project funds typically come from a mix of sources from the FTA and state and local government matching funds. The FTA’s New Starts CIG program, which provides funding to most new high capacity rail transit construction, provides funding to support new rail capacity projects, covering up to 60 percent of project costs. Other federal programs can supplement CIG funds up to 80 percent of project costs. State or local transit authorities must apply for this funding and are subject to CIG program requirements and other federal regulations.

CIG grants are usually awarded before construction begins and are fixed in their amount, which means any cost overruns are borne by the sponsoring agency or other funding sources. Current law authorizes up to $4.6 billion annually in discretionary grants to fixed-guideway (rail and bus rapid transit) projects, and the type of grant depends on the size of the project.

Private financing can also support capital and operating expenses for transit projects, though it is estimated that P3s represent only about three percent of transit contracts. One example is the Denver Eagle P3, for which three commuter rail lines, cars, and a maintenance facility were funded by a combination of federal grants and loans, local sales taxes, and financial contributions from the private contractor to be repaid by future governmental payments. International consortia sometimes bid on major transportation projects, as was the case with the Eagle P3.

Transit project construction in the United States is managed by public sector transit agencies. To qualify for federal grants, the public sector project sponsor must have in place a project management structure prior to construction that includes officials who serve as liaisons with the FTA, serve as the key decision-makers, interface with external agencies and contractors, and perform oversight and quality reviews, among other tasks. While transit agencies sometimes perform project management in-house, in most cases this role is contracted out to private consultants. Transit agencies must also work with local communities and agencies to obtain construction permits.

Some transit agencies use independent construction authorities to build projects, but it is not common. For example, in 1998, the California State Legislature created the Gold Line Construction Authority (GLCA) to take over construction of the initial segment of the Gold Line in Los Angeles, which was on the verge of being cancelled because of problems executing projects at the existing transit operator. The GLCA was independent from the region’s transportation authority and intended to be a smaller, focused, and more nimble organization with more flexibility in contracting as well as the power of eminent domain. The Exposition Line Construction Authority was also created to deliver both phases of Exposition Line project and was dissolved after transferring ownership of the line to the public agency to operate it.